Wear of a Composite Ceramic Head Caused by Liner Fracture

Third-generation composite ceramics (eg, Delta; DePuy Orthopaedics, Warsaw, Indiana; Ceramtec, Plochingen, Germany) have greatly improved material characteristics compared with second-generation products. This case report presents a patient after total hip arthroplasty with a fractured ceramic liner and a heavily worn ceramic head (both third-generation ceramics) retrieved 9 months after surgery. The patient showed no symptoms in the involved hip but presented to the hospital because of other symptoms. The failure was caused by a tilted liner that was overlooked after surgery and fractured consecutively. Rim chipping and splitting were the 2 fracture modes observed for the liner. The head did not fracture completely because of its high strength but became roughened by the ceramic fragments, causing major wear of the metal back of the cup. The phase transformation of the zirconium grains from tetragonal to monoclinic in the aluminum oxide matrix was shown by radiographic diffraction analysis in the heavily worn areas of the head. This transformation increases the fracture strength of the head. Metal debris caused by a roughened ceramic head without fracture is an unreported phenomenon for third-generation ceramic bearings in hip arthroplasty. This case shows that proper impaction of the ceramic liner into the metal shell to prevent later tiling during reduction is as important as correct component positioning. If a tilted ceramic liner is observed postoperatively, the position must be corrected immediately to prevent the major consequences observed in this patient. 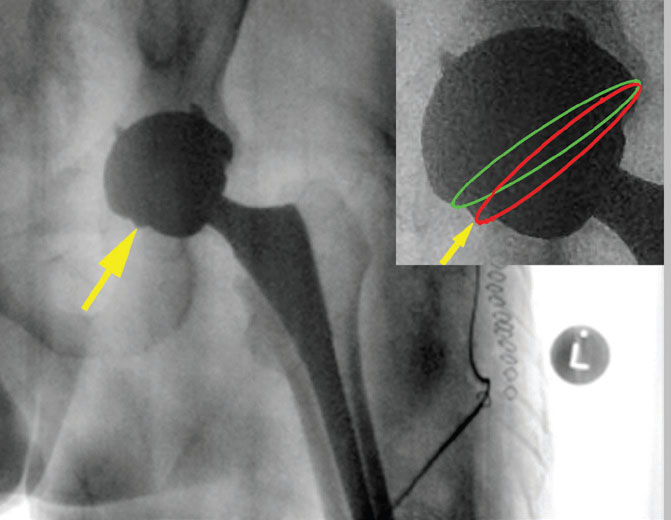 Figure: Direct postoperative radiograph showing the tilted ceramic liner (arrow). The estimated positions of the cup (green) and liner (red) are shown in the inset.

Fracture of ceramic hip joint bearing components was an issue in the early years after the introduction of ceramics as a bearing material. Fracture rates varied greatly between different sources and ranged from 0.004% to 1.7%.1-5 Today rates are even lower for the latest composite ceramics (third-generation materials), which have improved material characteristics. 6-8 Current cross-sectional failure rates can be found in the arthroplasty registers: of 8639 hip revision procedures in England and Wales, a fractured liner (including polyethylene) was the indication for revision in 103 cases (1% of revisions) and fracture of the head was the indication in 27 cases (less than 1%).9 The rates from Australia are even lower: fracture of the head accounts for 0.3% of all revisions and fracture of the acetabular liner (including polyethylene) accounts for 0.5%.10 These fractures occur, but the rates are very low. Almost all of these revisions are documented for second- generation ceramics (eg, Biolox Forte, Ceramtec, Plochingen, Germany). Isolated fractures of liners and 1 head failure have been reported for third-generation composite ceramics.11-14 This report documents a new failure mechanism observed in a thirdgeneration composite ceramic head with

Figure 2: Intraoperative findings during revision (A). Retrieved components at revision. The 3 areas of the head analyzed with radiographic diffraction are indicated: a, intact; b, minor; and c, major (B). The 2 main liner fragments with the straight fracture line (C).

A 29-year-old man (height, 1.85 m; weight, 85 kg) was involved in a car accident in November 2011. He had polytrauma with a displaced fracture of the neck of the left femur, fracture of the distal right femur, a dislocated left talus fracture, and a fractured left clavicle. He was treated with a left total hip arthroplasty using a size 3 standard offset uncemented titanium Summit stem (DePuy Orthopaedics, Warsaw, Indiana), a 52-mm Pinnacle 300 cup (DePuy Orthopaedics) with a 36-mm Delta (third-generation) ceramic liner (DePuy Orthopaedics), and a 36- mm +1.5 Delta ceramic head (DePuy Orthopaedics). He also received a retrograde nail in the right femur. The fractured clavicle and talus were treated with open reduction and internal fixation. He was admitted to the hospital for 6 weeks before discharge. Ten months after the original surgery, he presented to a different institution with shortening of the right leg as well as pain and stiffness of the left ankle. The left hip was asymptomatic. Clinically, 2-cm shortening of the right leg and a stiff, painful left ankle were noted. The left hip showed a good range of motion without pain. No noises were observed to emanate from the left hip. Radiographs obtained after primary surgery showed a tilted unseated ceramic liner (Figure 1; cup inclination/anteversion, 33°/8°; liner, 40°/9° estimated with IMATRI software [Denmyd Medical Equipment, Johannesburg, South Africa]).15,16 Radiographs obtained on presentation showed a fractured ceramic liner with 2 main fragments (Figure 1). At surgery, massive metallosis was noted in the tissues. After opening of the joint capsule, 2 large ceramic liner pieces and a few small ceramic fragments were found. Major wear of the ceramic head was also noted (Figure 2). The cup and stem components were well fixed and were left in situ. After thorough debridement, the ceramic liner was replaced with a similar liner and the head was replaced with an option head (Delta ceramic head with a titanium adapter for damaged stem tapers). After surgery, the patient progressed well and was discharged on postoperative day 3.

The geometry of the retrieved head was analyzed with a coordinate measuring machine (BHN-805 with a 2-mm diameter ruby tip, 2-μm accuracy, Mitutoyo, Japan). The method is described in detail then dissipated because of the described phase transformation, and further crack propagation was arrested. A pure alumina (second-generation) ceramic would probably have fractured completely in such a scenario. Metal debris and transfer to the head was caused in areas A and B of the metal cup shell (Figure 4), where the roughened ceramic head articulated with the metal.

Figure 3: Deviation of the head from the original spherical geometry (A). Radiograph defraction for the 3 different damage areas. The middle peak represents the tetragonal zirconium phase, and the 2 outer peaks represent the monoclinic phases (B). Abbreviation: cps, counts per second.

Discussion The phase transition (triggered by pressure, heat, or fluid) from the tetragonal phase to the stable monoclinic phase involves volume expansion. This is a design feature of composite ceramics. The expanding zirconium grains slow or stop crack growth by their transformation and therefore increase the strength of the material. 6 The observed failure was initiated by a tilted liner that was poorly fixed and might have come loose and tilted further as a result of joint loading. Impingement with the neck of the stem and chipping off of particles was probably the first ceramic fracture to occur (A in Figure 4). The second fracture—splitting of the liner— might have been caused by the very high bending stresses between the 2-point fixation of the jammed liner (between D and E in Figure 4). Contact of the ceramic fragments with the head surface likely resulted in very high surface pressures on the head, initiating cracks at the head surface. This ultimately caused the large surface defects and wear. The crack energy waselsewhere.17 Three areas (intact, small defect, and large defect) of the head were investigated with radiograph diffraction analysis for zirconium phase transformation (Bruker AXS GmbH, D8 Discover, Karlsruhe, Germany). Focus variation microscopy (InfiniteFocus Alicona, Graz, Austria) was used to image the surfaces.

Massive wear and roughening were observed in defined areas of the ceramic head (total volume, 22.42 mm³; maximum depth, 157 μm) (Figure 3). Three different morphologies were observed: intact surface, damaged surface (minor), and damaged surface with metal debris (major) (Figure 2). Radiographic diffraction showed a decreased tetragonal phase and an increased monoclinic phase of zirconium in the damaged areas. The 2 main cup fragments could not be analyzed quantitatively because of the major damage. Nearly the entire rim was chipped off, and the fracture line between the 2 main fragments was surprisingly straight (Figure 2). 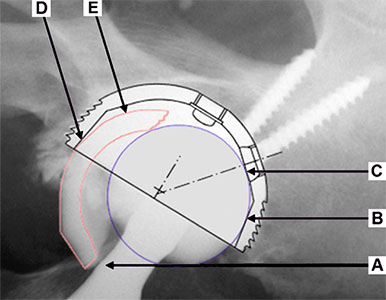 Figure 4: Schematic illustration of the suspected failure mode in a different patient. A, impingement with the neck; B, C, wear of the metal back by the roughened head (purple); D, E, area in which the liner (orange) fractured.

The problem was caused by a tilted liner that had been overlooked after implantation. The position of the liner must be checked carefully and impacted in the correct position into the metal shell to achieve fixation and prevent tilting during reduction of the joint. Revision with a ceramic liner in the existing cup was not without risk because a damaged cup taper—which is not always easy to identify visually— might cause another liner fracture because of stress concentrations. Because no "option" solution with a metal sleeve (as for the head) is available for the ceramic cup insert, a polyethylene liner would be the only other option if the stem and cup are not revised. A polyethylene liner bears the risk of rapid polyethylene wear because of ceramic particles, all of which might not have been removed during revision. In the current case, the surgeon decided that the benefit of a low-wearing ceramic-ceramic articulation outweighed the risk of a renewed liner fracture because the cup taper damage was considered minor. There is evidence that slight damage to the female cup taper is more acceptable than damage to the male stem taper.19 Because of the major defects observed in the joint articulation, the lack of symptoms from the left hip is surprising